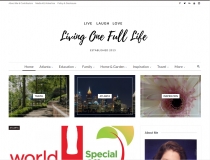 Last year a video swept through social media.  It was actually quite funny if you saw it.  It was a scene of some friends gathered around a table.  One of the individuals had this clear plastic device in his mouth and was trying to speak.  It provided millions of people laughs across the US, but it also left people scrambling trying to find this contraption.  Thankfully, you do not have to look much further to get your own!

Recently my family had a game night, and this game provided HOURS of non-stop laughing.  You might think that the mouthpieces would hurt your mouth, but they really don't.  They do take a little getting used to, and you gotta be prepared for looking silly.   This is just one of those games where you just have to be comfortable with being uncomfortable (in a good way).

Games come with adult and child-sized mouthpieces.  Mouthpieces and other pieces such as the straws or horns are able to be washed for future use.

The game is basically played by trying to guess what others are saying while wearing the mouthpiece.  I do not think I ever realized just how much my mouth was used to form the words I speak day to day.  Imagine trying to figure out what someone is saying when they can't form the words correctly!  What comes out is just plain hysterical!

You can take the game to the next level by playing the with the Throwdown cards.  These cards really do ramp up the game as you try to compete against others to drink from a straw, blow a horn, move a ping pong ball, and more.

If you are looking for something to give the family this holiday season, we think this should be it!  You are going to have hours of entertainment and memories that will last a lifetime!  Right now you can even save 15% with this code 15THROWDOWN  at http://amzn.to/2i6NKwG

What are you waiting for?  We want to see your family playing this game.  Who knows?  it might go viral!

Leave a Comment
submit a review Join our blog team

Proud Member of The US Family Guide Network